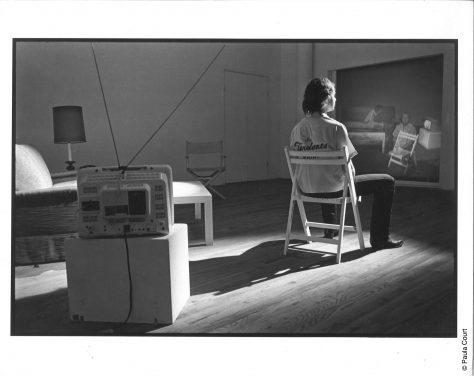 Spectator was an exhibition by video artists Kit Fitzgerald and John Sanborn at The Kitchen from September 30-October 11, 1980. The installation incorporated viewers, capturing them on a live video feed as they entered the space. Footage of the viewers was incorporated into prerecorded conversations between two actors who discussed interpersonal matters that was projected in front of an empty chair. The exhibition took the form of a sparsely decorated, brightly lit living room. Often, a desire to be an observer leads to spectatorship of ones own actions; Spectator questioned whether or not a heightened sense of simultaneous participation and observation would lead to a greater awareness of the "here and now."