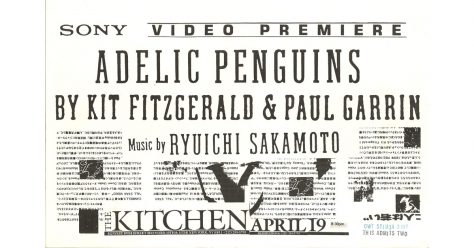 Adelic Penguins, described in the press release as "computer-generated psychedalia in seven parts," was screened at The Kitchen on April 19, 1986. It included song and dance, masks, butterflies, animated penguins and digital dreamscapes. The video work was originally presented as a live performance on the Sony Jumbo-tron at the Tsukuba Expo in Japan.