David Wojnarowicz is an American interdisciplinary artist whose work in writing, film, painting, drawing, photography, mixed-media installations, and performance he challenged society’s repressions of poverty, abuses of power, nationalism, gay sex, and the devastation of the AIDS epidemic. After losing his lover Peter Hujar to AIDS and being diagnosed himself, Wojnarowicz became involved with public debates about morality and censorship in the arts, medical research and funding, and artists’ legal rights. Wojnarowicz died of AIDS-related illness in New York City in 1992. His artwork is in numerous private and public collections, including the Whitney Museum of American Art and MoMA. 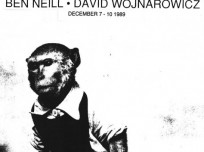