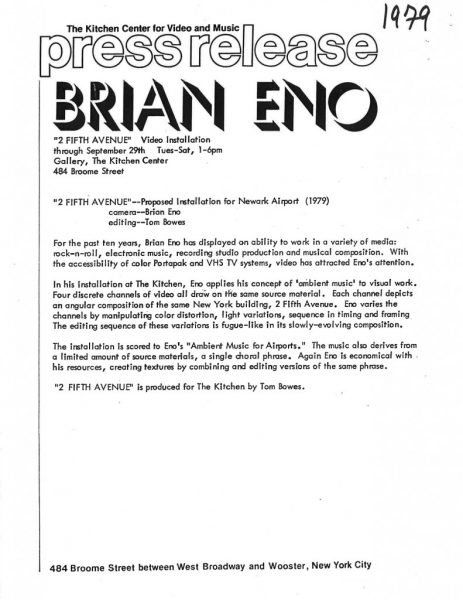 2 Fifth Avenue was originally conceived and proposed as a public installation for Newark Airport; while never installed at this site, this video installation toured extensively, beginning at The Kitchen in July 1979 and showing through 1980 at the Walker Art Center and LaGuardia Airport, among other locations. The work constituted a four-channel video with audio accompaniment executed and scored by Brian Eno and produced for The Kitchen by Tom Bowes. Each of the video channels focused on the facade of the same building, 2 Fifth Avenue, New York. Although sharing in content, the video shots differed in technique and formal quality, altering in color tint, light, timing, and composition. These visuals were supported by Eno's Ambient Music for Airports, which, like the videos, was constructed from an intricate manipulation of a single choral phrase. This synthesis of aesthetic and aural strategies resulted in a “fugue-like” work that could either cohere an environment or indicate its disunities.