Tom Hamilton maintains overlapping careers in audio production and music composition. Since 1990, Hamilton has been a member of the composer Robert Ashley’s touring opera ensemble, performing sound processing and mixing in both recordings and concerts. Hamilton has also composed and performed electronic music for over 40 years; his work with electronic music originated in the late-60s era of analog synthesis. He was the co-director of the 2004 Sounds Like Now festival, and he co-produced the Cooler in the Shade/Warmer by the Stove new music series for 14 years. Hamilton has appeared at The Kitchen throughout its history with Robert Ashley and in 1980 presented his composition Formal and Informal Music. 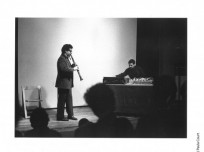