Stephen Holman is an American performance artist whose work combines vaudevillian tropes with contemporary performance art. Throughout the 1980s he regularly performed in alternative spaces in NYC where he was noted for his staging of boldly-colored, energetic and bizarre pieces of performance. In 1987, Holman co-founded Theatre Carnivale in Los Angeles, where he juxtaposed performances by artists such as the Kipper Kids, Johanna Went and John Fleck with that of more traditional entertainers, such as sword-swallowers or magicians, and as well as performing his own work. Holman’s performances at The Kitchen include Self Obliteration of Human Form with Theatre Carnivale in 1990 and Backwards Through the Bakery (A Murder Mystery) in 1992, which Holman described as “a mental vomit of structural theater elements” and was accompanied by Johanna Went, Clam Lynch and Alien Comic. 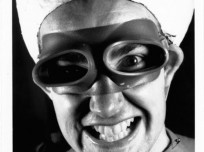