Robert Whitman (b. 1935) is best known for his eclectic seminal theater pieces from the early 1960s. He was an active figure in the New York art scene along with Claes Oldenburg, Jim Dine, Lucas Samaras, and Allan Kaprow, who created and staged many of the first “Happenings.” Whitman created unique theatrical environments by combining visual images, sounds, film, slides, and props in an evocative manner. He later became a co-founder of Experiments in Art and Technology with artist Robert Rauschenberg and engineers Billy Klüver and Fred Waldhauer in 1967. Whitman presented his works Music and Black Dirt at The Kitchen in 1974 and 1990, respectively. The Dia Art Foundation recently presented Playback, a retrospective of Whitman’s work, in 2003. 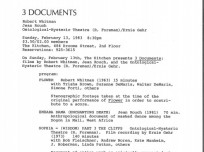 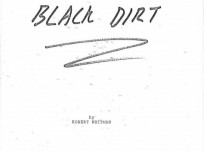