Rob List is an Amsterdam-based performer, choreographer, and teacher who has been experimenting with different style of dance, theater, and film work since the beginning of the 1980s. He has performed internationally and collaborated with artists such as Meredith Monk and Ping Chong. List and Chong—after their encounter in Amsterdam—worked together in the production of Rainer and the Knife, which premiered at The Kitchen in 1982. Following this collaboration, List performed as part of The Fiji Theater Company (now renamed Ping Chong & Company) for several years. Between 1987 and 1993, List founded and co-directed the Institute for New Dramaturgy, which focused on the experimentation and presentation of multidisciplinary compositions. Throughout his career he has been the recipient of several honors and awards, including the VSCD Mime Prize (1997), the Artist Prize from the City of Amsterdam (2002), and the National Endowment for the Arts Choreographic Fellowship (2004). For more information, please visit http://www.roblist.net/ 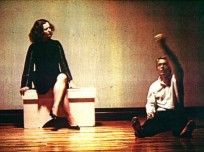