Olivier Mosset is a visual artist interested in issue of authorship as well as historical objects and painting in the context of their circulation. During the 1960s—as one of the four members of BMPT with Daniel Buren, Michel Parmentier and Niele Toroni—Mosset focused on procedures of deskilling and defying the idea of authorship. He was also a founder of the New York-based Radical Painting Group with Joseph Marioni and Marcia Hafif. After focusing on the circle and its iteration, he turned to monochrome shaped canvases that comment on the circuits of production and exchanges. In 2013, Mosset had a solo show at The Kitchen titled Esposition de groupe, curated by Thomas Delamarre and Sophie Claudel of the Cultural Services of the French Embassy, and Tim Griffin of The Kitchen. 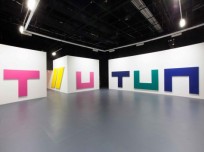