Larry Duckette was a musician, composer, actor, and writer. A native of Washington, D.C., he studied music in college, and in the years following became a major voice within and contributor to the culture of the African American LGBT community. He worked with filmmaker Marlon Riggs on pieces including Tongues United, which aired in PBS, and Black is, Black Ain’t. Earlier on Duckette became especially known for his work with poet and performance artist Essex Hemphill on a project called the Brass Rail—indeed, their decade-long friendship culminated in many collaborative works including Brother to Brother: Words from the Heart, performed in 1989 at The Kitchen. 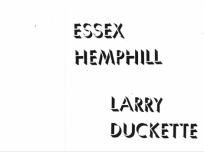