Laetitia Sonami is a French composer, performer, and sound installation artist who is notable for her innovative use of a sensory glove to manipulate sound, called the Lady’s Glove. Her sound installations blend audio and kinetic elements to create interdisciplinary compositions. After moving the United States in 1975, Sonami studied at the Boston Museum School of Fine Arts and joined the Electronic Music Studio. She returned to France to study Computer Music at Vincennes University, later coming back to the United States. She received her MFA at the Center for Contemporary Music at Mills College in 1980. Sonami defined her art form of gestural controllers combined with musical performance in the 1980s and 1990s, performing extensively in the United States, Europe, and Japan. In 1997, Sonami performed Lady’s Glove at The Kitchen. 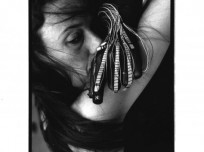