Josephine Meckseper juxtaposes the commercial and advertising language with the historical aesthetic of Modernism to bring attention to the contemporary consumption-driven society and political system. Her sculptures, installations, and collections of found objects shed light on paradoxes of the art world. Her work is also influenced by her German heritage, which is referenced through her inclusion historic images from World War I and II. Her projects are presented to the viewers in the form of retail-like assemblages, encouraging the audience to distance itself from the products and think critically. Meckseper’s work was featured in The Kitchen group exhibition JUST KICK IT TILL IT BREAKS in 2007. 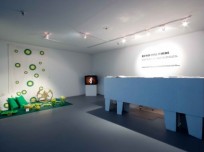