Jonathan Richman is a composer, performer, and guitarist perhaps best known for his work with his band The Modern Lovers. Influenced by the Velvet Underground as a teenager, he moved to NYC after graduating college and began playing music and immersing himself in the downtown scene. He later moved back to his native Boston and formed The Modern Lovers in the early 1970s with Jerry Harrison and David Robinson, among others. They recorded a series of demos with John Cale, and were later signed by Warner Bros. music, with whom they recorded a number of tracks that were released after the dissolution of the band in 1974. Richman went on to release a solo album, and to continue recording with new iterations of the band. Richman now frequently tours with Tommy Larkin, garnering fans wherever they play. 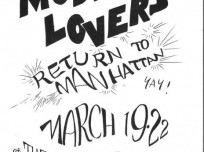