Bob Neuwirth is an American songwriter, producer, performer, and visual artist who has been experimenting with a variety of mediums and styles for the past 45 years. In the 1960s, thanks to his involvement in the folk music scene, he became friend with Bob Dylan with whom he collaborated on several projects, including documentaries of their tours and travels. Throughout his career, Neuwirth also worked with poet Michael McClure and singer Janis Joplin, with whom he co-wrote the song Mercedes Benz. In the 1980s he recorded two solo albums and started touring Europe, where he met artists such as John Cale, Warren Zevon, and Sid Griffin. In the fall of 1982, Neuwirth and Cale presented new musical compositions in Convergence at The Kitchen. For more information, please visit http://bobneuwirth.com/ 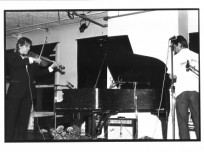