ABC No Rio is a collectively run center for art and activism based in lower Manhattan, formed in 1980 by artists committed to political and social values. ABC No Rio dates their beginning to The Real Estate Show, January 1st, 1980 in which thirty or more artists occupied an abandoned building to provoke New York City housing authority and land use policymakers. The exhibition artwork was confiscated and the City then negotiated with the artists, granting them a space at 156 Rivington, which became ABC No Rio. In the early years, ABC No Rio included many artists from New York’s downtown scene. On February 4th, 1983 The Kitchen presented ABC No Rio ‘s “Island of Negative Utopia,” a night of music, performance, and video; an installation by the collective was presented by The Kitchen February 1-5. More information about ABC No Rio can be found online at www.abcnorio.org. 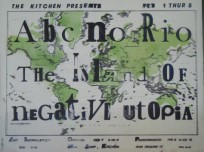