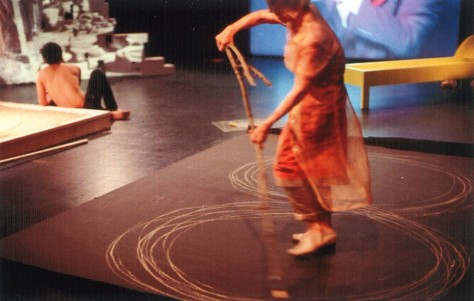 In 2004, Joan Jonas returned to The Kitchen with Lines in the Sand: Helen in Egypt. The multimedia production is based on the epic poem “Helen in Egypt” written by feminist American author Hilda Doolittle. Excerpts of the poem are interrupted by a Tribute To Freud, in which Doolittle discusses her analysis of the poem with Freud. Lines in The Sand also incorporates videos, drawings, and live performance. Multichannel projections with the head of Khafre on the Las Vegas strip are projected on the wall along with drawings by Jonas of sphinxes, pyramids, and spirals. The production comments on historical representations of Egypt juxtaposed with its contemporary kitsch appropriations, while also challenging the narrative that one woman was the sole cause of the Trojan War. Lines in The Sand was Jonas’s first time performing in New York in over a decade.