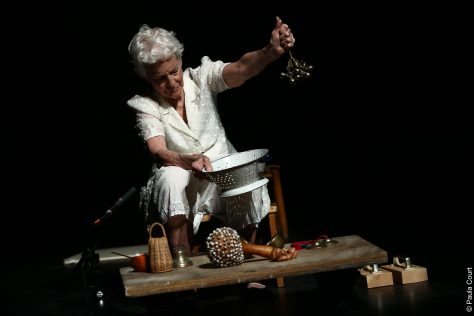 Joan Jonas’s They Come to Us without a Word II—originally performed at Teatro Piccolo Arsenale in conjunction with Jonas’s exhibition for the US Pavilion at the 56th Venice Biennale—was presented with live piano accompaniment by Jonas’s collaborator and composer Jason Moran in The Kitchen’s theater space in 2016. Investigating movement, space, and time in relation to sound and projected video, Jonas engaged with the shadows or ghosts of disappearances in the natural world caused by human indifference. The performance incorporated a wide variety of media, including video, drawing, dance, and sound. Jonas was accompanied by several children who were also featured in footage created for the US Pavilion in Venice, previously unseen footage re-edited for this performance, and singer Kate Fenner. These performances marked the North American premiere of the piece, organized as part of From Minimalism into Algorithm by Tim Griffin and Katy Dammers.