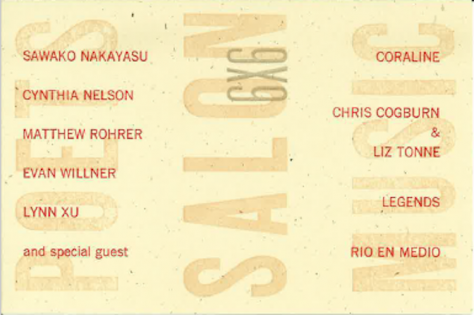 On February 13, 2007, The Kitchen presented an evening of readings and music organized by Ugly Duckling Presse in conjunction with the release of Issue #12 of 6x6, their tri-annual periodical that presents new poetry by six emerging poets.  The evening featured contributing poets from the current and forthcoming issues of 6x6 including Sawako Nakayasu, Cynthia Nelson, Matthew Rohrer, Evan Willner, and Lynn Xu.  There were also musical performances by Coraline, Rio en Medio, Chris Cogburn and Liz Tonne, and Legends.