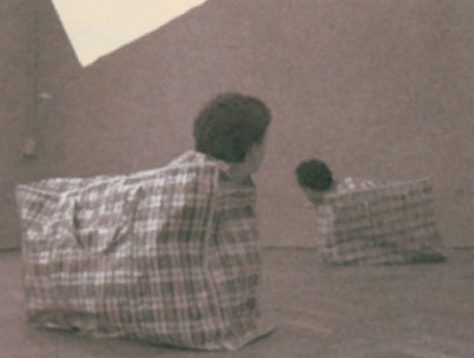 From October 9 through 12, 2002, The Kitchen presented the United States premiere of the performance piece Giszelle, choreographed in collaboration between Xavier Le Roy and Eszter Salamon. The piece was conceived by Le Roy, but created for and performed by Salamon, who struck critics as the piece’s artistic mastermind due to her colorful performance.  Exploring the human body’s ability to metamorphose itself, Giszelle progressed through familiar gestures and iconic choreographies that spanned centuries of human history, from Christ on the cross to Travolta in Saturday Night Fever. The performance was divided into two parts; the first was the piece itself, and the second, given various titles such as The B side of Giszelle and Some of Giszelle’s garbage, was composed of moments that Le Roy and Salamon decided to leave out of the finished composition.