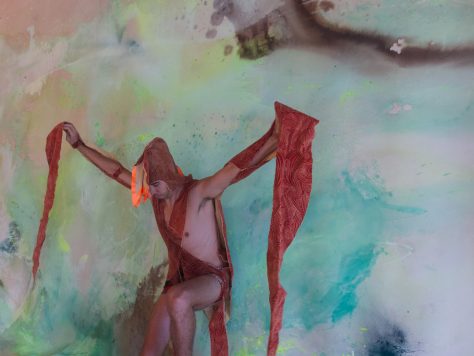 Sergei Tcherepnin’s Maize Mantis, performed at The Kitchen on the evenings of October 15–17, 2015, was a choreographed adaptation of Lucy Dodd’s novel The Genesis of Painting, which offers a visual allegory for the genesis of Picasso’s Guernica. The performance focused on the mythic creature in Dodd’s book, known as the "maize mantis." This being moves fluidly through its environment, taking the form of plants and shadows as its presence passes through them. The program featured thirteen performers, including Tcherepnin, who provided musical accompaniment with a composition for multichannel electronics that incorporated both recorded natural noises and electronically-produced sounds. Costume design and sculpture by Hanna Törnudd, paintings by Dodd and Kerstin Brätsch, and lighting by Zack Tinkelman further contributed to the performance's mystical natural setting.