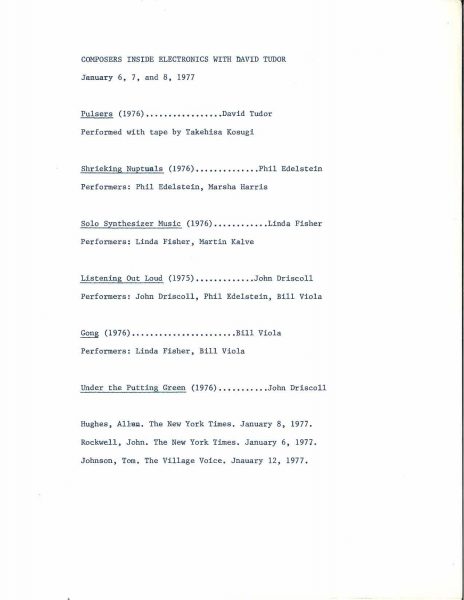 For three consecutive nights, members of the group Composers Inside Electronics performed a series of six pieces of electronic music, each composed by a member and often performed collaboratively by multiple members. The works ranged in form, material, and style, presenting a heterogeneous collection of pieces nonetheless united by a shared engagement with electronics. The third piece in the program, Linda Fisher’s Solo Synthesizer Music (1976) played by the artist and Martin Kalve, was a minimalist composition organized in three six-minute segments in which the final two segments recycled and incorporated elements from the prior portions. It thus offered a rigorously organized and composed use of electronics, systematizing repetitions, and modulated iterations of simple elements.

The other pieces in the program likewise positioned electronics not as ends in themselves, but as tools to realize specific types of compositions. David Tudor’s Pulsers (1976), in contrast to Fisher’s piece, followed a more freeform impulse. Tudor’s piece consisted simply of several channels of battery-powered circuitry that played over loudspeakers, which one reviewer described as producing sounds that “sputter and snap,” knowingly unrefined, not attempting to mask the inconsistencies of the electronics’ output. Tudor could modify the output of the circuits, but did not play them, and the recording incorporated a tape of Takehisa Kosugi playing long, howling sounds on the electric violin.

Brought together, the six pieces reflected at once collaboration amongst the composers and varied visions of where electronics might take them.