Born and raised in Los Angeles, Tim Miller trained extensively in several dance and theatre forms before moving to New York City in 1978 where he founded Performance Space 122. Miller debuted at The Kitchen by showing fragments of what would later become his critically acclaimed POSTWAR, an experiment in dance, theatre, music, and video dealing with the both the banal and the terrifying nuances of life in a nuclear world. He continued to perform at The Kitchen through the early 80s, and his early practice of blurring of boundaries between many disciplines served as a springboard for the rest of his career. Miller continued making performance work specifically dealing with his identity as a gay man, and was denied his National Endowment for the Arts Solo Performer Fellowship in 1990 because of pressure from the Bush administration to fit what they termed a standard of decency. For more information: http://www.timmillerperformer.com/ 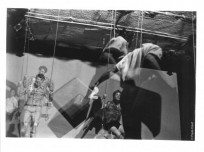