The Raincoats, seminal post-punk band, ‘godmothers of grunge’ and inspiration to a generation of riot grrrls, were formed in 1977 Gina Birch and Ana da Silva. This British band created a sound that, while inspired by punk and rock music that had come before was uniquely and uncompromisingly powerful and female. Rough Trade Records released the band’s first single, "Fairytale in the Supermarket"/ "In Love"/ "Adventures Close to Home" in May 1979 and the women went on their first tour later that year. After releasing their celebrated albums The Raincoats, Odyshape, The Kitchen Tapes, and Moving, Ana and Gina turned to solo projects by 1984. Ten years later The Raincoats performed together again to celebrate the reissues of their albums. Since then they have only made rare live appearances, most recently at The Kitchen's 2015 gala honoring Dan Graham and Kim Gordon. 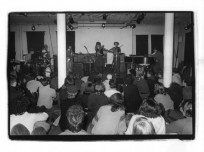