Founded in 1971 by Toni Basil and Don “Campbellock” Campbell, The Lockers were a seven-person dance troupe that were particularly active during the 1970s and are heralded as being pioneers of street dance. In addition to founding the locking dance style, Don Campbell had a song and step named after him—the “Campbellock.” The other members of the group contributed personally to street dance through their choreography and brought this particular style and staging into the public consciousness. The Kitchen’s 1981-1982 dance season opened with Street Dance NY to LA, a presentation that included “Toni Basil Presents a Decade of Los Angeles Street Dance,” in which Toni Basil gave a live review of Los Angeles street dance, as well as performances from some of the original members of The Lockers. 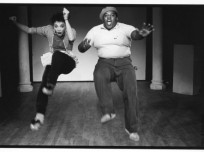