Although highly proficient in classical and orchestral tradition, the work of French cellist Sonia Wieder-Atherton (1961-) blurs the lines between media. Wieder-Atheron gained a traditional musical grounding through her studies in cello and chamber music at the Conservatoire National Superieur de Musique in Paris before proceeding to the tutelage of Natalia Chakhovskaïa at the Moscow Tchaikovsky Conservatory. Wieder-Atherton's most recent projects have presented her audience with visual and narrative experiences through which viewers are guided by the melodious notes of the artist's performance. Weider-Atherton performed her Odyssey for Cello and Imaginary Choir at The Kitchen in April 2013 in conjunction with Chantal Akerman's exhibition Maniac Shadows. 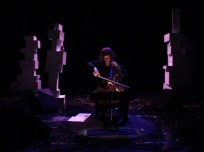