Sheryl Sutton is a dancer who has been pivotal in the development of theatrical avant-garde. While she lived in Chicago, she studied voice and dance, going on to take acting classes at The University of Iowa. In the 1970’s, she lived in Paris for three years where she performed a solo at the Musée d’Art Modrne and made a television film. She has worked closely on experimental theater projects with director Robert Wilson and performance artist Richard Gallo, performing with both artists at The Kitchen. Sutton presented her dance piece, Paces, at The Kitchen in 1977. 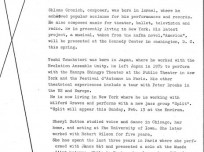