Sarah East Johnson is an American dancer and choreographer whose work pushes the normative boundaries and rigid stereotypes of the dance world. Johnson, who decided to devote her life to the practice of dance at age fourteen, began her professional career at the Merce Cunningham Studio in 1985. Throughout the late-80s and 90s, Johnson experimented with deconstructing her dance training, collaborating with other women who desired to work and create in alternative ways. After working with Jennifer Miller and Circus Amok, Johnson moved to San Francisco to study at their School of Circus Arts in 1996. Following this acrobatic education, Johnson founded LAVA, an all-female performance group that melds athletic movement, theatre and dance practice, social commentary, and scientific inquiry, in Brooklyn in 2000. LAVA is named after the eponymous natural phenomenon made up of silicon, oxygen, and various other elements that is constantly changing form and simultaneously destructive and additive in nature. Johnson has performed at The Kitchen six times: first in 1997 as a part of “Girls and Volcanoes,” twice in 1999, again in 2002, and twice more in 2004 for the workshop “Laying the Foundation for the Acrobats of the Future.” For more information please visit: http://www.lavabrooklyn.org/sarah-east-johnson/. 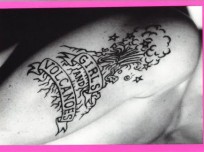