Penny Arcade, born Susana Ventura, is an American performance artist, writer, poet, and experimental theatre maker. At age 17, she became a member of John Vaccaro’s Playhouse of the Ridiculous, making her debut in Kenneth Bernard’s The Moke Eater. Still a teenager in the late 1960s, Arcade became a Warhol Factory Superstar. During the early 1970s, Arcade lived in Europe, returning to the United States 1975, and reemerged as a performer in the 1980s. Arcade has written 10 scripted performance plays, including BITCH!DYKE!FAGHAG!WHORE!, a show about sex and censorship which had an unprecedented year-long off-Broadway run in 1992-1993. Arcade’s work is always focused on giving voice to the other and the outsider, speaking truth to power, and using art as a method of resistance. Arcade performed a collaborative work with Chris Kraus and Jack McKeever at The Kitchen in 1998 titled Longing Lasts Longer. For more information, visit http://pennyarcade.tv/. 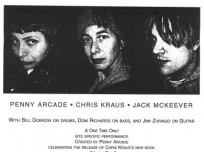