Paul Garrin is an American interdisciplinary artist whose work explores the social impact of technology, free speech, and access to information across the digital divide. Garrin graduated from the Cooper Union in 1982 and became an important collaborator of Nam June Paik, with whom he worked until 1996. During the 80-90s, Garrin participated in experimental fashion videography as well as interactive video installations and personal projects relating to his political interests. Garrin’s work is highly politicized and utilizes both low and high-end technology to address themes central to his political action. Since 1996, Garrin has run Name.Space, a social enterprise top-level domain registry that champions free speech as a necessary counterbalance to a powerful, bureaucratic government. 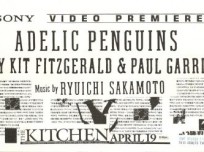