Kerry James Marshall is an artist engaged in documenting the history of black identity in the United States and the representation of African-Americans throughout the history of Western Art. He employs a variety of mediums, ranging from large-scale abstract paintings to comics and photography. Between then 1970s and 1980s, he extensively exhibited throughout museums and galleries both in Europe and the United States. In 1997 he was selected to take part in the Whitney Biennale and he performed Doppler Incidents at The Kitchen. Marshall is the recipient of many awards, among which the Rosenberg Medal (2016), the Wolfgang Hahn Prize (2014), and he was part of President Barack Obama’s Committee on the Arts and Humanities. 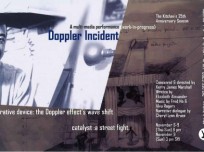