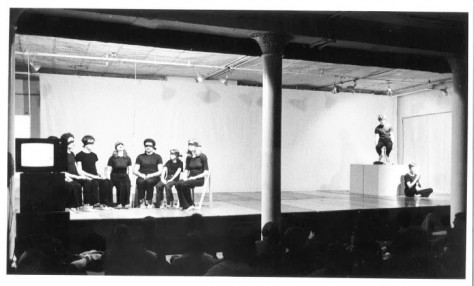 A poetic dance theater performance in five parts with prerecorded videotapes of character-generator typing, Emily Likes The TV was written and directed by Christopher Knowles in collaboration with Cynthia Lubar. Emily Likes The TV was a long poem Knowles wrote and recorded for his sister, and the poem repeated variations describing his sister’s viewing habits. With a cast of forty performers, this performance employed various audiotapes that were utilized for different sections; some to amplify the speaking voice of the performers, while others played music or sound effects at specific intervals throughout the piece. A section of Pierre Ruiz’s piano music was performed live at The Kitchen to conclude Emily Likes The TV.