Heather Kravas is an American choreographer and performer, whose work considers the boundaries of dance as an art form, often through the investigation of mundane tasks, repetition, and stillness. In the early 90's Kravas co-founded the repertory company D-9 in Seattle and performed with Amii LeGendre, Maureen Whiting, Karn Junkinsmith, and Jack Magai. Since moving to New York City in 1998 she has performed with choreographers Jennifer Allen, Yvonne Meier, and DD Dorvillier, serving as both interpreter and rehearsal assistant for human furture dance corps for over a decade. She also worked with cellist Okkyung Lee as the nono twins on a series of extended improvisations from 1999-2004. Kravas collaborated with artist Antonija Livingstone between 2003-2008, and their work was presented at The Kitchen. Kravas shown her own around the world, and most recently premiered a quartet at The Kitchen in 2014. 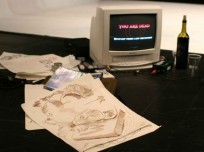