Jim Self is a multi-media artist who utilizes dance, painting, performance, and photography to transport his viewers into different worlds. Throughout his career Self has collaborated with a large array of musicians, visual artists, and performers since 1972. Self was a member of the Merce Cunningham Dance Company between 1976 and 1979. He later collaborated with Philip Glass and Robert Wilson on the opera The Civil Wars and worked with Frank Moore to produce the film Beehive, which was shown at The Kitchen in 1984.Self premiered work at The Kitchen throughout his career notably Perpetrator (1983) and New Zyuder Zee (1985). In The 1980’s Self toured with his own dance company Jim Self + Dancers, as part of The Kitchen’s touring program. He served on the Cornell University Dance faculty from 1989 – 2014. For more information please visit: http://www.jimboself.com/#!about/c10fk. 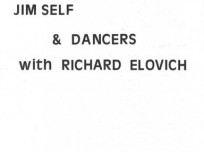