Jennifer Lacey is a choreographer based in New York, NY and Paris, France. During the 1990’s she was a member of the Randy Warshaw Dance Company and worked most notably with choreographers John Jasperse, DD Dorvillier, and Jennifer Monson. Later, she co-founded the company Megagloss with Carole Bodin. Her work $Shot created in collaboration with visual artist Nadia Lauro and with music composed by Zeena Parkins, premiered at The Kitchen in 2000 and won a New York Dance and Performance “Bessie" Award for set design by Lauro. Most recently she has collaborated with Wally Cardona and Antonija Livingstone. 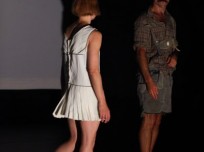