Hugo Largo was most popularly known as a three member ambient, art-rock group with two bassists, Tim Sommer and Adam Peacock, and vocalist Mimi Goese. The group included violist - and sound engineer for their live shows - Hahn Rowe on many of their recordings. The groups first full-length album was produced on Brian Eno's Opal Records label. In 1990, Sommer left the group and Bill Stair was brought in as a new bassist. The reformed group played shows for a year before performing for the last time in September of 1991. 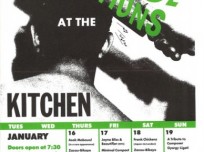