Fred Ho, born Fred Wei-han Houn, was a Chinese American baritone saxophonist, composer, bandleader, playwright, writer and Marxist social activist. While often associated with Asian-American ‘jazz’, Ho opposed the use of the term, citing it as a pejorative imposed onto Black-American music by White Americans. Ardently against assimilationist, Ho sought to define what Asian-American ‘jazz’ was as it related to the individuals producing it and their unique cultural conditions. His concern with what would comprise an Asian American musical form and typology with an influence in its own right, which would not be subsumed by another American musical genre such as ‘jazz,’ drove his prolific career. Many of his works take on subjects like Chinese folklore, physical combat, domestic abuse, revolutionary feminism, and the black power movement, like his 1999 performance at The Kitchen, Black Panther Ballet Suite. 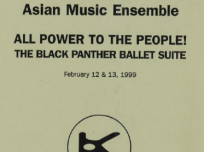