Doris Chase (1923-2008) is a sculptor, dancer, and video artist. She is primarily known for her video art displaying colorful abstract and geometric forms that shift and create beautiful optical images. Though many of the videos are focused on geometric shapes, many also include performers. The use of bodies in Chase’s works incorporates them as colorful forms or common faces manipulated by technological editing. In 1994 two of Chase’s films, The Chelsea and Thulami, were shown at The Kitchen. 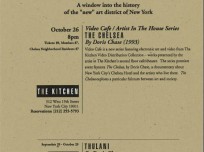