Byron Suber is an American choreographer, performer, and costume designer based in Ithaca, New York. Suber trained in classical ballet and attended the Hartford Ballet in Connecticut early in his career, where he performed the works of esteemed twentieth century choreographers, such as George Balanchine and Paul Taylor. In the early 1980s, Suber moved to New York City where he performed for other choreographers, including John Kelly and J. Fregalette Jansen, while also producing his own work, which expanded from dance and choreography into experimental theater, music and performance art. During this time, Suber also gained experience in costume and set design working as an assistant to the fashion designer and visual artist Stephen Sprouse, and created costumes for a number of dance and theater companies in New York and London. In 1991, Suber moved to Ithaca, New York, where he has held a position on the faculty of the Department of Theater, Film, and Dance at Cornell University ever since. In recent years, Suber has continued to choreograph ballet, modern, and dance theater works, in addition to creating performance works that focus on vocals and body movement. He has also broadened his research into the realms of history and architecture, receiving an M.A in the History of Architecture and Urbanism from the School of Art, Architecture and Planning at Cornell in 2010. For more information please visit: http://pma.cornell.edu/byron-suber 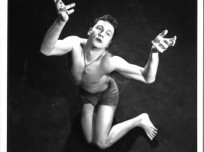