Anita Sieff is an Italian visual artist based in Venice, where she produces photography, film, and video. From 1989 to 1990, her yearlong experience of working with the Italian film director Michelangelo Antonioni in Rome inspired Sieff to move to New York City to study film. From 1996 to 2001, Sieff was a Project Director for the Guggenheim Museum in Venice, where she organized evening events to engage the public through the sharing of ideas of authors, scientists, and artists. During her tenure at the institution, Sieff initiated her own project, EthTV, in 1998 and launched an eponymous website. Active today, EthTV is part of an on-going large scale ethical project that welcomes the international community to express and exchange their thoughts of art while enabling them to work collaboratively on its virtual platform. As Sieff continued to work closely with people of different demographics, the role as well as importance of communication became the motivation and essence of her artistic creations. In October, 1999, Sieff’s solo show at The Kitchen debuted her "Social Sculpture No. 1," an video installation that invited viewer to become its subject rather than mere observer. Like her other works, "Social Sculpture No. 1" focused on creating an ephemeral yet sincere dialogue that intended to challenge while broadening the public’s understanding of communication as a means for comprehensiveness and social inquiry. 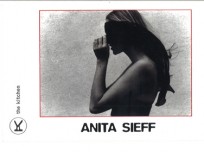