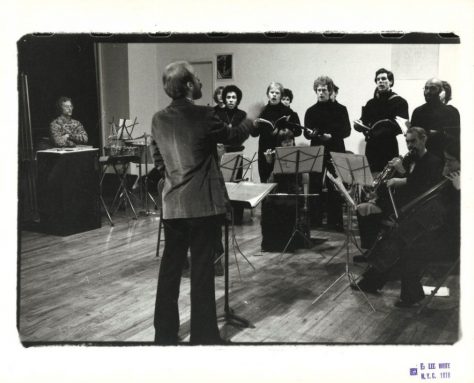 Ann Wilson presented her opera Butler's Lives of the Saints at The Kitchen in 1978. This work was developed in concert with Mary Brecht, Andrew deGroat, Richard Gibson, Kenneth King, Carol Mullins, Gene Rickard, Sheryl Sutton, and Stephen Tittle. The libretto was composed of excerpts from artists Wilson considered saints of art who were overlooked during their lifetimes but later revered, including Vincent Van Gogh, Virginia Woolf, Simone Weil, Johann Wolfgang von Goethe, Ovid, Paul Gaugin, and Emily Dickinson, among others. Wilson attempted to make the space into a cathedral and covered the space with painted scrims depicting works of art by these masters. She tried to make art history accessible to a general audience by making resource books available to the public and holding lectures and performances during the day.