Lucy Guerin is an Australian dancer and choreographer based in Melbourne, Australia. Guerin began her dance training in Adelaide, Australia in the 1970s and upon graduating from Adelaide’s Center for Performing Arts in 1982 she worked for a number of dance companies across Australia including Russell Dumas’ Dance Exchange and Nanette Hassall’s Dance Works. Guerin was based in New York City from 1989 until 1996 during which time she performed with a variety of dance companies and began working as a choreographer. Guerin went on to tour Europe (1997-98) and over the following number of years received significant critical acclaim for her choreographic works. In 2002 Guerin relocated to Australia and set up the dance company Lucy Guerin Inc. in Melbourne, which has been credited with influencing the increasing significance of Australian dance. Guerin performed her Bessie Award-winning work Two Lies at The Kitchen in 1997. 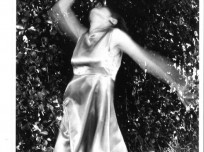