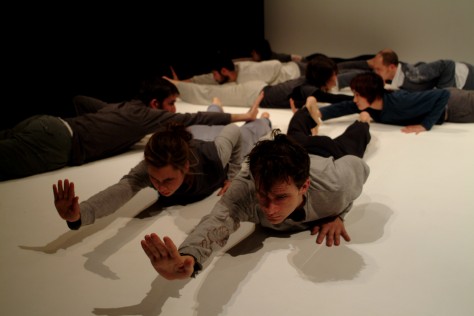 Nottthing Is Importanttt by choreographer DD Dorvillier consisted of three conceptually connected sections of a dance with nine performers, a video screening, and a sound environment. The sections were not strictly connected, but related within the theme of what was visible and invisible. The nine performers Danielle Goldman, Martin Lanz Landazuri, Alejandra Martorell, Andrea Maurer, Paul Neuninger, Mina Nishimura, Peter Sciscioli, Otto Ramstad, and Elizabeth Ward, moved in a mechanical and calm manner. DD Dorvillier appeared alongside John Jernquist in the film section, directed by Dorvillier and edited by Ryutaro Ishikane, with design by Victor Morales. It consisted of both live action and computer game animation. The final section led the audience to a pitch black room, where dancers performed with only an occasional light revealed to highlight their movements. Zeena Parkins provided the sound design and Thomas Dunn did the lighting design.