Born in Kansas in 1954, Linda Hill is an American writer and actress who first became famous for being a stand-up comedy improviser in San Francisco-based groups such as Spaghetti Jam, Femprov, and National Theater of the Deranged. In 1988, Hill moved to New York City, where she continued to work in TV and movie credits such as Tony ’n’ Tina’s Wedding, The Confirmation at The Vineyard, and Mary Todd Lincoln at Cucaracha Theatre. Hill has also appeared regularly on Comedy Central, Cinemax with Father Guido Sarducci, and PBS’ Comedy Tonight with Whoopi Goldberg. Her solo performance works include An Audience with Linda Hill, Incognito Sex, Hope in Kansas, Angel Spreads Her Wings, and Too Many Clothes, which premiered at The Kitchen in 1996. Called “a skillful parodist of female body language and fashion” by the New York Times, Hill performed and premiered another one-woman-show, Star 69, at The Kitchen in 1997. 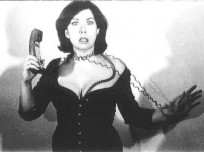