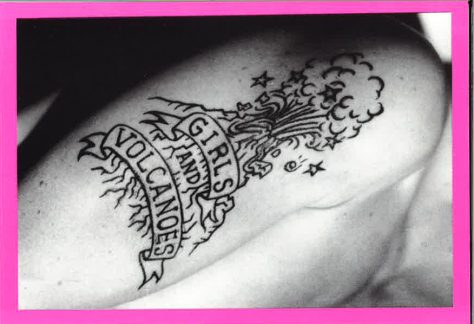 Girls and Volcanoes was a performance at The Kitchen from March 6-9, 1997 that incorporated circus acrobatics, wrestling, swinging trapeze, live rock and roll and slide and video projections as a way to illustrate the relationships between movements of the human body and movements of plate tectonics and volcanoes. Choreographed by Sarah East Johnson this work utilized acrobatic techniques to sculpt bodies into architectural formations resembling geological landscapes. Her piece explored the movement of lava and gravity, working with the groundedness of the human body as it physically wrestled with other dancers and natural forces. Footage of geological phenomena and instructional images were projected to contextualize the performance with music performed by Babe the Blue Ox ranging from soothing melodies to raucous dissonance. Performers included Christine Knight, Tanya Gagne, Morgan Thorson, Adrienne Truscott, and Lisa Johnson.