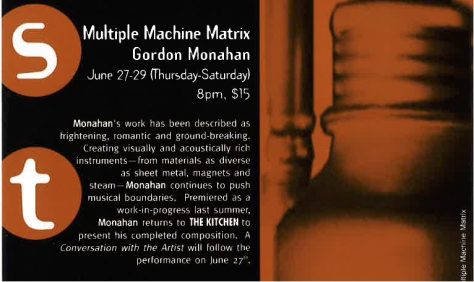 Multiple Machine Matrix was the fourth and final version of Gordon Monahan’s piece Sounds & The Machines That Make Them, whose second version had premiered at The Kitchen in 1995. Transforming electronic surplus and trash elements into viable machine-instruments, the Canadian sound artist formed an ensemble of computer-controlled kinetic sound sculptures that moved layers of acoustic sounds in physical space using pulse-controlled bi-directional metal sheet Doppler Spinners and percussion-activated furniture. Employing the same MIDI system as earlier iterations within the series, Multiple Machine Matrix was operated with 99.9% technical reliability, producing identical sounds from two completely different materials or actions. Assisted by Stock, Monahan presented a sound and musical phenomenon that prompted a reconsideration of, in his words, “our assumptions about what music is and where it comes from.”