Caitlin Cook is a New York-based choreographer, dancer and musician. In 1997 she began creating dance and music performances with artist Calder Martin, with whom she continues to collaborate. Cook is the creator of the Dance/Band group, Skint and has been a vocalist in the bands Vizusa, Excepter and Insayngel. She first presented her performance work at The Kitchen in 2003, when she participated in the two-month long program Dance and Progress (now titled Dance in Process), which focuses on dancers who are emerging as choreographers. In 2005, Cook returned to The Kitchen to present a new half-evening, commissioned work which merged live real-time video projections with a solo dance performed by Cook herself. Her 2006 work SKIMP was commissioned by The Kitchen and involved a cast of female performers and musicians. 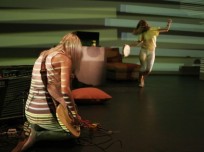