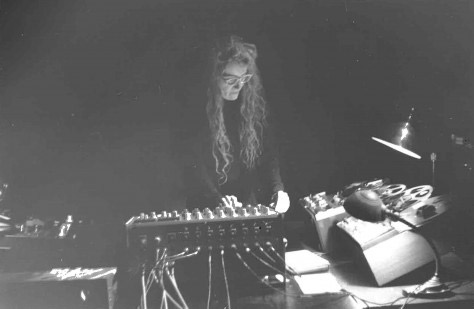 This Maryanne Amacher performance opened The Kitchen’s 1988 Electronic Music Festival. Speakers were spread throughout the room and the audience was allowed to walk in the space, while Amacher adjusted the sound on her control panel. Initially, the music aimed at penetrating the audience as if it were liquid pouring from the ceiling of the room; later on, the music felt as though it was coming out from the viewers’ ears. The extreme volume and intensity of Amacher’s performance rendered music a communal experience. Furthermore, because of the peculiar setting of the room and the free movements of the participants, Amacher was able to challenge the traditional relationship between performers, artworks, and audience, as well as raise awareness on the presence of sounds in everyday settings.