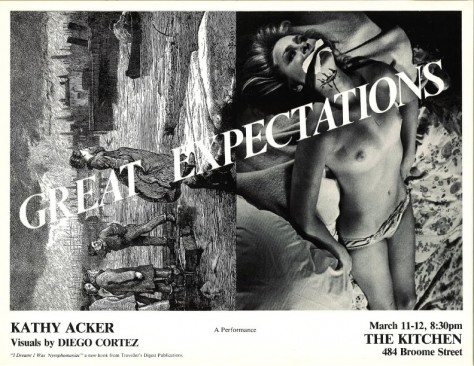 Before publishing Great Expectations as a novel in 1982, Kathy Acker read her original rewrite of Charles Dickens’s novel as a solo performance piece at The Kitchen. Though the stage remained bare for the entirety of the reading, Diego Cortez provided an accompanying poster of a nude woman bound and bleeding from the neck set alongside an engraving of a Victorian river scene. Playing off Dickens’s depictions of survival in the underbelly of society, the narrator in Acker’s version of Great Expectations switches identities, genders, and centuries, and includes a semi-autobiographical account of her mother’s suicide. In exploring multiple points of view, the text plays into Western cultural tensions between the idyllic and the perverse.