Wynne Greenwood is a multi-disciplinary artist who is most well-known for pairing live performance with pre-recorded material. Hailing from the Pacific Northwest, Greenwood’s practice was shaped in part by local influences in the DIY Riot Grrrl scene of the early 1990s. Greenwood is most well-known for her project with her band Tracy + The Plastics. Founded in the late 1990’s, the band consists of three members: Tracy, Nikki, and Cola. During live shows Greenwood (as Tracy) performed alongside pre-recorded projections of herself as alter-egos: Nikki and Cola. Between 1999 and 2006 Tracy + The Plastics toured extensively, playing a range of DIY and alternative spaces for music and art. The construction of the self, and gender in particular, fuels much of the dialogue within Greenwood’s work, pulling at the tension between personal identity and physical space. Greenwood continues a legacy of women and queer artists claiming a physical and social space for their work. In 2005 The Kitchen commissioned Room an interactive installation and performance space that Greenwood realized in collaboration with Fawn Krieger. 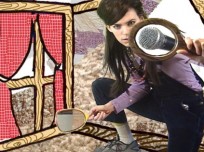