Timothy Buckley is an American choreographer and dancer. Most well known for his work in the 1980s and early 1990s, some of his celebrated pieces include “How to Swing a Dog” and "A Letter to Diaghilev." He has been awarded two Choreographer’s Fellowships by the National Endowment for the Arts. Buckley presented two works at The Kitchen: Barn Fever in 1983 Proximology in 1986. Since 2000 he has worked with IBM, translating business design strategies and developing IBM client offerings in new service areas. 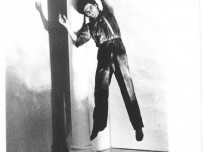